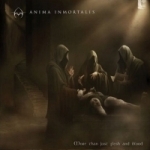 Quite a long time has passed by since the debut album of this Santiago based outfit was unleashed upon the headbanging masses. I really enjoyed "Everlasting" in 2005 which offered solid songs and I predicted a bright future for ANIMA INMORTALIS. Unfortuately it lasted six years till their follow up record was finally available in the stores. The first thing I noticed is that the band matured a lot in the songwriting department – it would be a disappointment in case they didn’t improve within this period of time. I also think that this five piece increased the power and intensity (without neglecting the excellent playing abilities) as the new tracks have much more drive, crisp and seem to be more brutal than their old stuff. "More Than Just Flesh And Blood" simply kills and outclasses the "Everlasting" album. Period! These guys can handle their instruments which was already clear more than six years ago and are tight as Hell. On the new ten tracker they show real class and great potential again. No weak songs at all, a powerful sound and varied, yet crushing tunes make this disc quite enjoyable. Their Swedish Death / Black influences are still present in their sound – refreshing and total convincing. The tempo changes (great blasts, heavy mid pace sections) fit perfectly as well as the cool breaks and fantastic leads / melodies which absolutely don’t harm the overall intensity. These ingredients are the icing of the cake. It’s hard to pick out some highlights but tracks like ‘Under A Bloodish Play Of Hate’ or ‘Smells Of Death And Evilness’ should please every deathbangers out there. So in case you like to get one piece of this strong release you should not hesitate to get in touch either with the label www.australisrecords.com or the band itself animainmortalis@gmail.com.