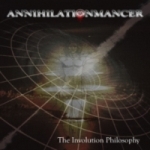 ANNIHILATIONMANCER
The Involution Philosophy
(Pure Underground Records)
48:24min
German True Metal label Pure Steel Records has almost recently been divided into a couple of other sub-divisions off which Pure Underground Records seems probably to appeal me most roster-wise (at least on the paper). One of the first signings to the aforementioned label is Italian progressive Thrashers ANNIHILATIONMANCER whose debut album, “The Involution Philosophy”, including 7 tracks (+ an intro). Musically ANNIHILATIONMANCER (what kind of a friggin’ word monster is that for a band name, uh!) take no shortcut by aping straight some more established names around them, but try to add their very own twist into the world of progressive, power-Thrash. This three-piece Italian act actually does sound pretty unorthodox altogether – and their debut album certainly ain’t that accessible and easy listen due to many odd timings the songs contain. To give you an idea how they might carefully sound like, take bands like – let’s say, the early days WATCHTOWER and HELSTAR – and then cook both of ‘em along with small doses of fresh meat-raw and blood-boiling Thrash Metal in the same cauldron, and you pretty much have ANNIHILATIONMANCER. I guess those of you who have already heard ANNIHILATIONMANCER, have perhaps noticed vocalist and guitarist Bruno reminds of Dave Mustaine of MEGADETH quite a bit, the guy having a similar, snarling type of vocal style to Mustaine’s – added with more malicious and spitting type of vocalism (à la SADUS and FALSE PROPHET / INFERNAL HEIRARCHY) that he also does in between the songs every now and then. Luca’s bass lines also deserve to be mentioned, as his playing style tends to bring Steve DiGiorgio’s complicated, jazzy-tinged bass patterns in mind whenever the other instruments allow to give more space for Luca to torture bass with his tender hands. As one cannot success without the other, it would also been a great thing if the guitar’s sound had been a bit thicker and more on the surface in this recording. Other than that, the production is overall crispy and unpolished, serving well the guys’ hard-edged and somewhat raw power-Thrash. Good stuff here if you like to boil your ears in the deep waters of prog-ish and technically demanding Thrash Metal. Well, at least I know I do. www.annihilationmancer.com or www.myspace.com/annihilationmancer
Luxi Lahtinen