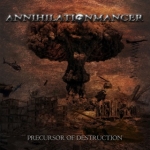 Fierce Thrash Metal with a nice Speed Metal edge from Naples, Italy, is what this one man army and undead duo of two programmers are delivering – and if it takes two to deliver decent programmed drumming, please keep this mind for the future, dear Metal scene. The drum programming is actually quite vivid and follows the frantic riffing and aggressive music quite organically. The style is old school and straight in your face, some effective guitar riffing with root in pre – 90s Thrash and Speed Metal, both European and American, compiled and delivered with conviction and power, and the Dave Mustaine – like vocals do it for me, and fit quite into the world of ANNIHILATIONMANCER. A name that should win an award, for a band formed back in 1994, where a lot more pronouncable names were available to snatch, these guys took the high road. I’m an old grumpy nostalgic that likes music that sound and feels like forlorn times, as most of the music such an old grumpy bastard is listening to, was made back then, when Thrash and Speed Metal were badass, and the rest of the scene, posers. ANNIHILATIONMANCER takes me a little way back to those times, and paying homage to ‘Tormentor’ and the mighty KREATOR doesn’t make things worse, when it’s one worthy like here. More info here: www.facebook.com/pages/annihilationmancer/50223910732, http://annihilationmancer.bandcamp.com