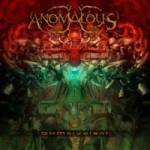 After an EP in 2006, US progressive Death Metal act ANOMALOUS now delivers its first full-length album “Ohmnivalent” which is truly a demanding, complex and highly technical assault on your senses – so consider this rather food for your brain than for your gut. Featuring members from ONTOGENY and most prominently ex-VITAL REMAINS / ex-BRAIN DRILL drum beast Marco Pitruzzella you can bet your tiny little asses that you will get some high-class, high-speed drumming here flavouring a furious storm of blasts with twisted, jazzy rhythms that melt quite nicely with the overall really dynamic, variable and nonetheless brutal material. ANOMALOUS switch effortlessly from devastating brutality in the vein of BENEATH THE MASSACRE, ORIGIN to shifting, grooving rhythms clearly inspired by MESHUGGAH to the trippy, dreamy feel of CYNIC, late DEATH resulting in an exhaustive but also truly diverse and enthralling album where you never know for sure what hides behind the next corner. Especially in the mercilessly grooving midpaced passages and during the calm, introspective moments “Ohmnivalent” develops a mass of potential. Also, Tim Hale’s vocals surprise with a good dose of variation between low growls, aggressive shouts and screams. Rounded off by a heavy and fortunately for this genre not too clinical production, “Ohmnivalent” is a strong debut that only suffers from the same old problem many bands in this field suffer from: too much technique, way too few emotions, not enough feeling. I might be a bit stubborn or too old school in my mindset but if I compare tech Death albums like DEATH’s “Individual Thought Patterns”, “Symbolic” or as more current example THE FACELESS’ brilliant “Planetary Duality” with “Ohmnivalent”, ANOMALOUS simply fall short of providing structures among all the skilfull playing and polyrhythmic extravaganza that enables you to actually remember any of the mindblowing material you’ve just heard. The very essence of all art is to create something people will remember for eternity, the second I turn out “Ohmnivalent” I will have forgotten most of it. www.myspace.com/anomalousmetal, www.brutalbands.com