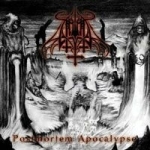 That the US underground Black and Death Metal scene is raging at the moment has been proved by the latest releases by BLACK WITCHERY, GRAND BELIAL’s KEY, THORNSPAWN or WIND OF THE BLACK MOUNTAINS, just to name a few. Now ANWYL – a malicious Black / Death / Thrash three-piece heading from Hutchinson, Kansas – add their debut CD / LP "Postmortem Apocalypse" to those other great offerings. A killer production, lots of brutal and driving Thrash & Death Metal riffs, relentless blasting drums (good job, Mikai!) and a vocalist screaming in totally hateful aggression make ANWYL’s first release a remarkable sonic onslaught!!! My personal faves are ‘Ordeal By Corpse’, ‘Of Faust And Fury’, which arouses parallels to cult Deathers ANGEL CORPSE, although ANWYL are a bit more Thrash influenced, and the unusual but awesome ENTOMBED Cover ‘Supposed To Rot’, which might be interpreted as a statement for the uniting of underground Black and Death Metal in one powerful force. So if you like a well-produced, highly aggressive, misanthropic Black / Death / Thrash mixture be sure to check out this strong and talented new band – the name is ANWYL, the album is called "Postmortem Apocalypse" and it is fucking intense!!! Try to get the LP version, because it contains a cool cover of SODOM’s ‘Persecution Mania’ as bonus. Contact: ANWYL, Box 192, Hutchinson, Kansas 67504, USA Website: http://go.to/Anwyl, Email: Anwyl666@hotmail.com