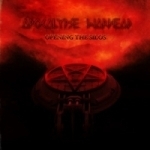 So, this is just the one-man project act that has been put together by the former guitarist of Finnish Hardcore legends RYTMIHÄIRIÖ? Tuukka Laitinen is the mastermind behind APOCALYPSE WARHEAD, responsible for playing all the instruments for this – including also vocals and drum programming. On the paper, I openly have to admit – based on my own experience as far as these one-man projects are concerned, only a very small percentage out of all these one-man bands have managed to impress me how well they have actually been done. Having just one guy behind everything, ain’t surely everyone’s game. Most often – and sadly, most of these one-man bands are simply somewhat pitiful attempts to try to become recognized – and unfortunately not much more really. Usually they last like a year or two, but most often even less than that. They simply vanish away like snow after winter is over. With APOCALYPSE WARHEAD, I am relatively confident to say this act gets stuck to you like a sticky gum on the back of your fancy jeans. I mean, if sheer quality level of this act’s breath-taking brutality and marvelous technicality are about to meet some of those demanded standards what it takes to rip a few heads out of the shoulders. Tuukka – with some help coming from Pan Ziege (of NULL DYNAMO; taking care of the lyrics for the 3 songs on this recording), has created quite a fleshripping monster as far as the execution of the songs on this surprisingly potential release is concerned. To say it the shortest way possible, this is fast, technical and amazingly tricky, modern Death Metal that borrows / combines parts from bands like NECROPHAGIST, HATE ETERNAL, VITAL REMAINS and even the most vicious era of SLAYER. No kidding, dear folks. Obviously Tuukka has truly taken his time when creating this infamous monster during his lonely, darkest hours; this sounds anything but a rushed project, making it all more to sound like there could be more people behind APOCALYPSE WARHEAD. A strange thing is, there’s not – just Tuukka alone – obviously with his twisted and morbid visions how to find all those bits and pieces for one pulverzing Death Metal assault that will wipe away all the living from the face of the planet Earth – well, at least metaphorically speaking anyway. Turkka can be credited basically for greatly done – bowels turning death grunts, totally ripping guitar work, blistering solos, pounding bass parts and even very nicely programmed drums on this ear-grinding, 9-track package. In fact, "Opening The Silos" is one of those rare Death Metal albums for me for a quite long while that will probably stand the test of time during a long run. Not only it’s already amazing enough to realize there’s only one guy behind all of this, but the way how professionally everything has been executed on this record – and to realize it only needed one man’s effort to make it all to sound this convincing, makes it also quite darn unbelieveable. What amazes me even more, this album has been released digitally only, which is a big fuckin’ screaming crime. Somebody out there who runs your own recod label, WAKE UP! Do us a big favor and sign this band. APOCALYPSE WARHEAD deserves to have this pummeling and lethal Death Metal available in some other format too but not only digitally. One more thing: "Opening The Silos" is dedicated to Jeff Hanneman, but the reasons are obvious enough, I guess. www.apocalypsewarhead.bandcamp.com