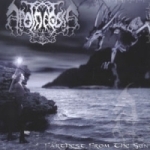 Somehow I always knew that Sauron didn’t die in Mordor in ancient times. Now there is evidence that he went to Malta. As the one ring was destroyed in the fires of Mount Doom, Sauron founded a symphonic Black Metal project in 1993 called APOTHEOSIS and this time his attempt to spread evil all over the world might be more successful. Instead of a magic ring he uses an indeed magic CD called "Farthest From The Sun" to gather our souls (and in darkness bind them). There are four tracks on here, all of them fairly long. A considerable amount of playing time is reserved for rather bombastic acoustic parts and especially the opening track called ‘Victory’ sounds like a good epic movie soundtrack. The Black Metal elements in general are quite melodic, yet fast and aggressive. The speed on track 2, ‘The Maimed God’, sometimes makes me dizzy although it’s not that fast – I guess it’s the contrast with the bombastic parts. I can’t help but stand in amazement: in APOTHEOSIS there is high musicianship combined with great creativity in the songwriting department. This record is a floating unit, nothing sounds artificial. If you like (symphonic, progressive) Black Metal: this one’s definitely for you! One record to rule them all, one record to find them, one record to bring them all and in the darkness bind them in the land of Malta where the shadows lie. (I think it’s really time for your medicine again, Ramon… – Frank).