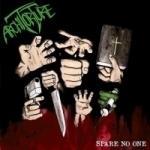 Retro-Thrash or get retro-Thrashed… could well be an updated slogan to some other more known slogan among Metal heads, I guess. ARCHITORTURE from Finland, featuring 4 relentless Thrash maniacs armed with a true DIY-attitude, have finally unleashed their 8-track debut full-length studio album titled "Spare No One" – and even on their own label BWK Records. Within the band’s existence of 7 years, the guys have already released a fistful of demos / EPs that have been taken pretty well in the underground Metal circles. The members in ARCHITORTURE obviously got pretty fed up by waiting for that right offer coming from labels one day, so taking this side of business to their own hands (i.e. releasing an album on their own), undoubtedly removed some of the frustrations out of their shoulders, as we should believe. "Spare No One" is honestly a pretty solid effort from ARCHITORTURE; straightforward and fast Thrash Metal loaded with lots of aggression that takes some of its influences from SLAYER, EXODUS and overall early Teutonic Thrash Metal scene. These four Finns – adoring Thrash Metal as it can only be adored, have sort of realized that you don’t necessarily have to be the most technical or most experienced act on the face on the earth, to make your Thrash Metal sound convincing and appealing enough. Sometimes it’s enough when you can keep things simple and somewhat stripped down even; the way as ARCHITORTURE do it, to make a positive colored impression on people. In ARCHITORTURE one is able to sense that true rage and angst of youth; that one striving force that keeps you going on by the help of sheer enthusiasm of playing and pure joy of doing something worth your time. ARCHITORTURE sound fuckin’ restless and downright wild, even at times kind of reminding me of the Brazilian Thrashers VIOLATOR (check out such speedsters as ‘Treachery’ and ‘At The Gates Of Sodom’), which hardly is a bad thing by any means. As for just the debut of theirs, the album’s got a justified amount of certain wild and young charm to it that should fascinate many Thrash Metal fans out there. Absolutely worth checking out. www.facebook.com/architorturemetal, www.bwkrecords.com/architorture