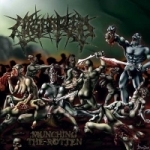 The history of ARSEBREED goes back to the year 2000, when they were founded under the name BLOODCUM. But after releasing the “Arsestabbers” demo in the following year, the band split up in 2002 and is now, after different line-up changes, back under the name ARSEBREED. When listening to this CD my first thought was DEICIDE – “Legion”. The same kind of brutal Death Metal. But ARSEBREED are not just a simple clone, they manage to play a really enjoyable mixture of extreme Death Metal and Grindcore. The song structures remind me of the above mentioned DEICIDE and SEVERE TORTURE or BRODEQUIN, but sometimes they tip over into complex, yet melodic grinding madness, which is obviously influenced by CRYPTOPSY. The vocals are as deep growled as possible, but almost all songs feature background vocals, so it does not get too boring. The production – for me – is absolutely suitable. The short playing time is as always a little bit controversy, but I guess all of you are competent enough to make your own opinion about that issue. For myself thirty minutes is just the perfect running time for such an album. So if you like Death Metal the brutal way you should not miss this one! www.bloodcum.nl