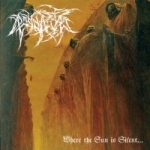 ASHDAUTAS
Where The Sun Is Silent
(Full Moon Productions)
25:14min

If there is a band that more effectively captures the majesty of chaos in its music, I have not heard it. ASHDAUTAS are masters at the cultivation of disorder. Throughout the 25 minutes of this MCD (which to my mind, far surpasses "Shadowplays Of Grief And Pain"), they weave together a universe that is uncomfortable and yet highly alluring playing a style of Black Metal that truly resembles no other. There are, it seems, four songs on this CD; however, the CD only contains one track forcing the listener to take in the entire collection. This is fitting though, because the songs are played live in a single take and there is no downtime between them. In fact, without knowing otherwise, the listener would probably be inclined to assume the work to be one long composition rather than a collection of discrete songs. The beauty of ASHDAUTAS is the way the listener is guided as the band summons intricate form from the ashes of entropy. At times the music is dense and one must struggle to find an intact thread to follow, and then when the dissonance seems to be waxing to its highest point, the cracks in the surface open and the structure of the song rushes forth to fill the void. All of the instruments work together to achieve this effect, but it is the guitars that at once create and destroy the form of the songs. The vocals, suicidal and bleak, are well-placed within the music and accentuate the effect of the recording far better than on the band’s previous album. A casual listener may dismiss ASHDAUTAS as undisciplined and unoriginal. Nothing is further from the truth, however. The riffs employed here are as complex as any I have heard and operate on myriad levels with the composition of the song. As one listens closely one can hear the brilliance with which the guitars shimmer golden amid the densely crafted fabric of chaos and decay. This is Black Metal of the highest order – unique and individualized. Especially when viewed in the context of the U.S. Black Metal scene, "Where The Sun Is Silent…" stands high above most of what has been released in recent years. www.fmp666.com