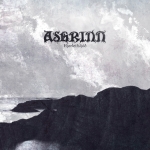 I have never understood the sense of album trailers, they never worked for me. It is all right to check out new releases by listening to small snippets of music, but at least I want to be the person who decides what parts I take a listen to, although I never was the guy spending hour after hour at the record store. At these produced trailers you never know if they simply put all highlights together and the rest is of the album is just fillers, no killers, so to say. And mostly the visual aspect is totally missing. If you visit the homepage of ASKRINN you are asked: "Do you like Black Metal?" combined with an invitation to watch the video trailer for "Hjørleifsljóð". And despite my doubts regarding trailers I only can advise everyone who approves the above mentioned question – take a listen. Especially if you like the kind of Black Metal SATYRICON or ENSLAVED used to play in the early nineties up there in Norway. The band labels their music as Pagan Black Metal, but be not afraid of any flutes, lutes, bag pipes or whatever is nowadays connected with the once so elaborated term "pagan". Blame me for writing a copy and paste review, but the band’s own words perfectly describes the music: "Medieval Scandinavian texts and beliefs are merged with powerful Black Metal riffs mixing both old school influences and a more modern melodic approach." Yes, that’s it. Listening to a song like ‘Frá Konungum, Hjørleifi Ok Hreiðari’ makes me remember why I (and some other maniacs all over the globe) started listening to Black Metal in the early nineties. The sound, the riffs, the vocals, the lyrics, the rhythm changes, the atmosphere, just everything. The last song on this release is a cover of a song from a band called BORNHOLM. That is what I call understatement – an unknown band is covered by an even more unknown band. The CD version of this album, by the way the second release by ASKRINN, is limited to 60 copies, but it is also available for free digital download. www.askrinn.com, www.facebook.com/askrinn