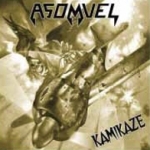 You may recall that on some of their records, SODOM played MOTÖRHEAD-inspired songs like ‘Ausgebombt’, or indeed, played MOTÖRHEAD covers like ‘Iron Fist’. ASOMVEL is the United Kingdom’s MOTÖRHEAD-inspired sodomites. This record has an abundance of energy. If ASOMVEL ever take to the road, they’ll have to play all the songs they have in their discography. Interestingly, songs such as the second track, ‘No Twist Of Fate’, have the requisite Rock’n’Roll energy, but just as the chords gear up for another verse, something darker rears its head, but only for a moment. It’s moments like these, and more, that make this debut one of the most entertaining and concert worthy I’ve heard in a long, long time. www.myspace.com/asomvel