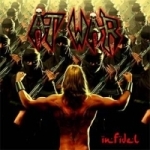 I do remember AT WAR. Back then it was in a distro list which came inside on record I just bought. And whereas most bands were labeled “Speed Metal” or “Thrash Metal” this one in their debut album was advertised as “Speed / Thrash Metal”. Obviously it caught my attention and that one of my fellow Metallers back then. Nope, we didn’t order anything that time; we were just poor high school Metallers with just money for a few beers. But still we did get the tape for “Ordered To Kill” by doing what you did back then: tape trading. And I must admit that at first I didn’t get that much from that album. The production was “dry” to call it in a way, and it sounded damn raw. A few months later one of us got the vinyl and we were stoked for the cover art, that picture of the long haired members holding real guns… wow, those were memories. I don’t know if the cover art had an impact on the music, but in the end it did sounded better… jut for looking at the cover art. Oh, but let’s get to the music. Yeah, it could be said that they were a Speed / Thrash metal band. They had some galloping guitars more akin to early SLAYER while also have some faster song reminding of VENOM (specially the Cronos-like vocals), and a lot to MOTÖRHEAD. No wonder they included a cover in that first record. Still, with the entire aura this release had, I also knew that this was not really in league with some other bands which were more interesting and exciting. Well, now let’s fast forward 23 years later. I knew the band was still alive or at least recovered from a long hiatus and were ready to release some new Metal. I have found most of these reunion$ or waking up $lumber to be boring. In fact of all those reactivated bands that are worthy nowadays for their actual recordings I can hardly count them with one hand. Some of those bands, like most of the ancient gods, still survive due to them playing live their old material. Well, in the case of AT WAR, let’s just say that they are still playing the same style, if probably more influenced by MOTÖRHEAD in way they do tend to sound like newer SODOM (so no big surprise here, eh?) and they obviously got a very powerful production, and some interesting riffing here and there, with more than some old school touches, and obviously a better performance. I also appreciate the fact that it is the original line-up, which considering they were a trio was probably not as hard as lets say a 5 piece unit. So, what bring us some 20 + years after their debut release? Well, it is an interesting album, which still possesses that old school feeling, with a very good production and some good songs. I would say this as good as their debut album, and a lot better than their second effort “Retaliatory Strike”. I do sense they are a bit faster in this, so with the coming of age, that is a thing to thank, than just slowing down. Still, as it was the case with their debut album, the vocals are pretty much one-dimensional, and they tend to abuse sometimes of more old Hardcore / Metallish riffs that with a modern production are not exactly fitting that well with their more Thrash Metal sound. After a couple more listening to the album, some songs and riffs are more coherent, and the power contained in those start to explode. In the end, we have a competent Speed / Thrash Metal album, with a really awful cover art, with the war-themed figure present, and with a sound that is pretty much their own. If you liked them back then, you might enjoy this one. Otherwise, do not expect much more than a good Speed / Thrash Metal album with gruff vocals. www.myspace.com/atwartheband, www.heavyartillery.us.