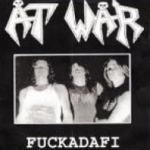 Japanese showa-wielding Thrash-master Barbatos (also of Abigail and Cutthroat) unleashes more of his trademark shredding savagery and exhumes the classic At War track ‘Fuckadafi’ for the B-side. Anyone familiar with Barbatos’ "War! Speed and Power" album from last year will know what to expect from "Burning Soldier" – totally out-of-control seething Metal fury. At War rounds things out nicely with a track that seems strangely appropriate these days. The names and targets may have changed, but the basic idea remains sound. Being a 45 rpm release, the sound quality is better than your average single. Only 200 pressed, so act at hell’s pace and track down this collector’s piece. Contact: lothlorien4now@netzero.com