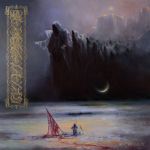 If you think that life is nothing but a dark, viscous stream in an utterly cold world, you are welcome to enter the world of ATRAMENTUS! This Franco-Canadian five-piece from Longueuil in the province of Quebec seems to have found the formula of turning blackness and doom into sound. And that sound is a real challenge even for those of you who like Doom Metal or Death / Doom. From the first moment, the thick riffs, underlined by an ultra-slow and ultimately heavy beat demand an even physical attention I never before experienced. The heaviness is almost corporeal, the darkness unfolds around you and you feel ice cold winds coming from out of nowhere. You might call it Funeral Doom, but this is just one ingredient of the recipe of darkness ATRAMENTUS created. The two extremely long songs and the aligning interlude that are the three parts of the album “Stygian” have so much more to offer. In the first part (‘Stygian I: From Tumultuous Heavens…’) we find an epic atmosphere all over that adds a little SOLSTICE flair to this song. With the second part, the interlude ‘Stygian II: In Ageless Slumber’, we find a really ambient dark atmosphere that also is a defining part of the third part. This final part ‘Stygian III: Perennial Voyage’ joins the dark sound of ATRAMENTUS with the devastating atmosphere of newer Black Metal bands and thus creates a monstrous monolith of utter blackness. Taking into concern that “Stygian” is the debut album of a band that literally was a blank paper, ATRAMENTUS delivered a more than brilliant album here. If you need some refreshment from the current heatwave (at least here in Germany), get chilled by the ice cold winds on “Stygian”. More at www.facebook.com/atramentusdoom or visit their label at www.facebook.com/20buckspin