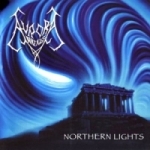 These guys must’ve been quite busy over the past couple of years as they already appeared on three compilation albums, contributed tracks to no less than five tribute records (MORBID ANGEL, JUDAS PRIEST, BLACK SABBATH, DIO and SLAYER), put out a mini CD entitled "Mansions Of Eternity" in 1996 and two full lengths ("Praise The Archaic Lights Embrace" – 1998 and "Northern Lights" – 2000). The most "famous" dude in the band probably is guitarist / vocalist Ron Vento, who used to be in LESTREGUS NOSFERATUS a couple of years ago along with former HALLOWS EVE man Skellator, who released a bunch of cool demos before they disappeared into nothingness. I never heard any of the other AURORA BOREALIS releases before, so I gotta concentrate on this newest full length, which offers highly aggressive and very energetic Thrash from start to finish, performed with the blasting intensity of raw Nordic Black Metal. Technically well executed, but not necessarily good enough produced to do the material completely justice. This is more of an underground type release, not completely unique, but at least always very honest and devastating sounding. Both full length CDs sell for $12 each (ppd.), the mini for CD $9. You can contact them at the following address: Ron Vento, P.O. Box 1327, Clinton, MD 20735-5327, U.S.A., e-mail: aurora4dth@aol.com, internet: www.auroraborealis.org Latest news: AURORA BOREALIS will also appear on upcoming KREATOR and W.A.S.P. tributes.