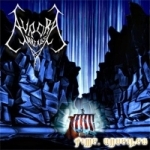 Although their band name sounds a bit silly, the technical US Black / Death act AURORA BOREALIS convinced me with their last album "Northern Lights" (2001) that names do not mean a thing. On their newest album Ron Vento (vocals / guitars / bass) und Tim Yeung (drums) unleash a much more brutal Black / Death assault, that is not only blessed by a powerful production, but also with fascinating song material and technical finesse, all together features that should attract more Metal fans out there to this underestimated act. If you have problems with screamed vocal parts, you might have problems with this, but any open-minded Death Metal fan should check this CD out, because it does not sound as wimpy as much of the other stuff than is labeled Black / Death. There are crushing blasts, fast and complex riff assaults as well as some slower, heavy moments. Sometimes AURORA BOREALIS make me think of a faster and more aggressive version of the glorious NOCTURNUS, especially during the verses of ‘Transversing The Tides’, whereas during the fast parts of ‘The Last Day’ or ‘Berserker’ they remind me of HATE ETERNAL, only with scream vocals. Ron Vento’s intense vocal performance gives AURORA BOREALIS a unique and individual note, that lets them stand out of the mass of American Death Metal bands. "Time Unveiled" is a highlight for any fan of technical and aggressive Metal and proves once again that you can create killing Black / Death without sounding as soft and "un-heavy" as the boring Swedish acts. The European version of "Time, Unveiled" consists of seven new songs and two ’94 demo tracks, which are also cool, although the drums sound a bit sterile, but anyway find out for yourself – I can only recommend you to do it! For a link to the band’s page check out the label’s website: www.diehardmusic.com.