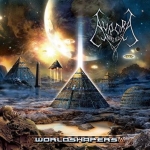 AURORA BOREALIS are a long running band from the US, that is the brainchild of Rob Vento, who ran this band for a certain time with only a drummer to accompany him. “Worldshapers” already is the sixth album of AURORA BOREALIS, and I have to admit that I missed out their previous releases completely. So maybe I am the right one to say something about this one, open-minded in concern of the band and without particular expectations. And if you expect not too much, you might like “Worldshapers”, as long as you’re into something between Death, Black and Thrash Metal. If you don’t expect too much, you will be pleased with a lot of riffs on high speed, garnished with a rather unremarkable Black Metal voice. OK, let’s be fair: “Worldshapers” is a technically flawless album, very well played, with a clean production. Maybe too clean and a little generic, since there really is nothing that catches the ear. Due to that, my first three attempts to listen to the album in its entirety were canceled after three songs at the latest. When I finally had the discipline to listen to “Worldshapers” completely, I found out that the album gets a little better in the end, but not too good anyway. But songs like ‘This Is The Way They Choose To Die’ or the closing ‘And To The Stars Returned’ are the little highlights on an album that doesn’t really convince me. If you’re interested, check out the following sites: www.auroraborealis.org, www.facebook.com/pages/aurora-borealis-official/110855228945757 or www.xtreemmusic.com