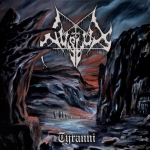 “Tyranni” is the second full length album from Sweden’s AVSLUT, but you wouldn’t know it. They possess a tight precision and songwriting mastery that is usually reserved for bands of a particular patina. “Tyranni” starts off in a style that is reminiscent of early DIMMU BORGIR or DARK FUNERAL. It leads you to believe it’s going to be a powerful and aggressive war march, but there’s surprisingly a lot of emotion in here. One doesn’t just imagine Orcs clashing with Elves while listening to “Tyranni”, you can also feel the grief of watching the world burn. Something I love about Black Metal is the sense of apocalyptic despair, and “Tyranni” does not disappoint. Their lyrics focus on misanthropy and misery, and the mood of the music is the perfect vessel for this lyrical style. While the album on the whole is decidedly vicious, the guitars can at times create a vast and empty atmosphere, almost ambient in nature, which can lift us above the scorched and bitter earth that AVSLUT has painted beneath us; and yet the solid aggression in the vocals, not to mention the relentless drumming, keeps us from drifting away. The drumming style stands out as being particularly impressive in this album. There’s no shortage of blast beats and double bass, and yet there is a fluid style that keeps them surprising and satisfying. Rhythmically this album is very interesting as well. They tend to follow the standard 6/8 and 4/4 patterns typical to Black Metal, but AVSLUT continues to catch my attention with unusual strumming patterns and accent notes in the melodies. Their chordal structure as well follows the standard minor and phrygian patterns that we know and love about Black Metal, but AVSLUT isn’t afraid of the major scale. Their selectiveness is what makes it so satisfying. After several minutes of assailing drums and discordant guitar melodies, one might expect a major chord to be followed with a change in direction, but AVSLUT doesn’t let us stay too long in that comfort. Aesthetically, I was surprised when I first saw their promo photos. Black Metal corpse paint meets Deathcore muscles and tattoos, complete with short sleeve hoodies, which is an interesting combination. I wouldn’t be surprised if they take some inspiration from Deathcore in their songwriting as well. Their sound isn’t 100% Black Metal, there’s an infusion of something else here which creates a unique sound. AVSLUT has accomplished something great in this album, and that is the definitive “sound” – you’ll be able to identify AVSLUT when you hear them. Go listen to this album, it has something for everyone in there. Just don’t watch their music video for ‘Pestens Lärjungar’. Trust me, the music is best left as it is. Favorite track: ‘Dråp’. More band information at: www.facebook.com/1008avslut1008, label contact: www.osmoseproductions.com