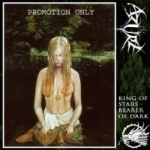 Don’t really know what to make out of this one. First and foremost: the cover sucks. I think most Metal fans have a soft spot for swords ‘n sorcery but this kind of third-grade Conan imagery is just ridiculous. To more important things: AZURE play a melodic version of blackened Metal, comparable to OLD MAN’S CHILD or maybe a slower THY PRIMRDIOAL. What strikes me as brilliant about their music is the guitar-work. This guy is definitely talented and there are some really magnificent solos on display here for example in the opening ‘Dead Men’s Shadow Flickering’. He – as far as I understood, AZURE is more or less a one-man-project – also gathered some pretty excellent studio-musicians for this recording (wicked bass-player!). What I don’t like is the vocal-delivery which sounds almost painfully forced to me. The songwriting isn’t totally convincing as well, especially in the second half of the record until the semi-acoustic title-track ends things up on a positive note. There are a lot of cool parts scattered around the various tracks but they don’t always make for a fully satisfying arrangement. Still there is a lot of potential here and if the mentioned weaknesses will be improved we might expect something really exciting from AZURE in the future. www.pulverised.net