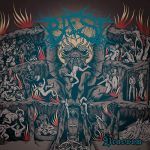 Somehow last year’s debut by BAEST slipped through my fingers, but from the reactions it must have been a good one. BAEST was featured on Danish mainstream TV and radio, they won nationally awards, played big festivals and supported well-known bands. Not bad for band which started 2015 and previously to their debut just released a demo and an EP in 2016. So let’s see if the band is really that good or if it is just a bottomless media circus. With the perfect playing time of a quarter of an hour the album starts with high-speed Death Metal, aggressive to the maximum and the listener is little bit overrun by the opening steamroller called ‘Vitriol Lament’. But luckily, as the album proceeds, more facets appear. Already during the second song ‘Gula’ BAEST prove that they also are able to master the slower side of Death Metal. I guess it is no coincidence that they have chosen ‘No Guts, No Glory’ by BOLT THROWER as cover tune on "Venenum". While the debut was dominated by buzz saw HM-2 Swedish Death Metal, BAEST this time incorporated slower elements. Slower, not necessarily Doom ridden components. Instead CANNIBAL CORPSE, IMMOLATION and MONSTROSITY served as inspiration. Accordingly the band stated the song ‘As Above So Below’ is dedicated to Chuck Schuldiner and his latter works with DEATH. So BAEST forged an explosive mixture of Swedish and American Death Metal. Some old school fanatics may not like the polished sound, but it is far away from being too clinical or sterile. And if you have such an technical approach to music like BAEST I guess a clean and powerful sound with focus on brutality is better than something rotten from the grave. By the way, all involved musicians have not played in any bands before, believe it or not. For playing in their first band together for four years the technical abilities and songwriting skills are astonishing. What I liked most are the vocals, performed guttural yet understandable with an enormous brutality. As the cover suggests, the concept is inspired by Dante’s classic poem "Inferno", each of the nine songs represents musically and lyrically a separate circle in hell. To sum it up: the praise BAEST received is absolutely justified and the band does not need to hide behind bigger names. Instead, the bigger names must exert themselves to not be outstripped by this Danish Death Metal wrecking ball. Please visit www.facebook.com/baestband or www.centurymedia.com to convince yourself.