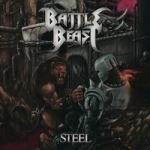 BATTLE BEAST
Steel
(Hype Records)
46:00min
This young Finnish Metal band named BATTLE BEAST has heavily been hyped up in Finland. Wonder whether there’s something truly special in them after all? Well, to start with, the band won the W.O.A. Metal Battle in 2010, got a slot to play at the Finnish Metal Expo in 2011 – and their debut single "Show Me How To Die" (which was released digitally only), has been in a constant airplay rotation in the Finnish airwaves as of lately. When I heard a single track ‘Show Me How To Die’ off the band’s forthcoming debut album “Steel” on the Finnish radio for the first time, I was hooked. It truly sounded darn good; catchy as fuck with a sinfully memorable chorus part, and otherwise musically paying enough homage to some of those traditional Heavy Metal bands – from ACCEPT to W.A.S.P. to PRIEST and so forth, that we all loved back in the 80s. When I realized later on that the band is fronted by a female called Nitte Valo (not related to Ville Valo of H.I.M. though), it made things even kind of a bit more special for me as I was thinking BATTLE BEAST has a male vocalist instead of a female vocalist, due to Nitte’s way to sing like any male Heavy Metal singer with her raspy and relatively high-pitched voice. “Steel”, the band’s 11-track debut album followed soon – and at this point my curiosity level had risen drastically about them. Now after spinning BATTLE BEAST’s debut studio album back and forth – days and nights, I am safe to say all the fuss and hype that have been going around this young and talented group, indeed make quite a lot of sense to me. The musicians in the BATTLE BEAST camp are undoubtedly incredibly talented, combining quite a few different Metal styles together in order to form something special music-wise that allows the band reach many fans within classic Heavy Metal, Power Metal, Battle Metal and even Opera Metal (à la NIGHTWISH). BATTLE BEAST’s musical roots are in the 80s, but the way how they incorporate some other Metal styles into their own metallic soup – and do it even so well, gives them a very good cutting edge to win a great number of Metal fans over their side. And I strongly believe that’s what has already happened. Vocalist Nitte Valo is really convincing with her vocals parts, making me still scratching my forehead every now and then, me pondering whether she eats testosterone-filled corn flakes for breakfast due to her way to sound so powerful yet still revealing at times there’s however a female behind the lead vocals of the band. From ‘The Band Of The Hawk’, which even could be a track taken out from TURISAS’ song repertoire – to a hard rocking ‘Justice And Metal’ – to somewhat MANOWAR-ish title track of the album, ‘Steel’ – to ‘Savage And Saint’, that has a familiar NIGHTWISH-vibe to it, this record offers a good company over 45 minutes for its listeners. If BATTLE BEAST were ever meant to become the next big thing in Metal from Finland since NIGHTWISH, then I would not wonder it one damn bit. They have got some serious resources to gain something truly magnificent with this band in the future, so if that’s ever meant to happen, then it’s meant to happen. Good luck – may the success follow you. www.hypeproductions.fi/battlebeast or www.myspace.com/battlebeastband
Luxi Lahtinen