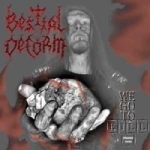 Without any doubt Russia has a huge undergound Metal scene and a lot of bands with great potential to offer. Unfortunately most of the bands from this country remain undiscovered or just some insiders know their qualities. "We Go To Kill" is a three track promo CD by BESTIAL DEFORM, an infernal horde hailing from St. Petersburg which raises the banner of diabolical, brutal Death Metal. This band has already been around since 1990 and has already released three full length albums ("Together We Destroy The World" 1994, "Bellum Contra Omnes" 1996 and "The Second Coming" 2004) as well as some demos. Unfortunately I am not familiar with one of their previous works so I can’t compare if the band’s new promo is their strongest work or not. After listening to the 3 tracks one thing is clear: the four members are competent musicians and are technically skilled. It seems that one of their influences might be MORBID ANGEL and they have had a listen to this cult act from Florida not only once. The EP starts off with ‘True God’ which is an infernal fast Death Metal tune with morbid mid tempo parts which really reminds me a little bit on MORBID ANGEL. They also included a small synth part in the refrain here which should create an eerie atmosphere. But I think the song would work much better without it. The same goes for the second tune ‘Jesus Is Dead’. It is a slow, mid tempo track with some high speed parts. The little interlude here (keys sounding like a spinet) just disturbes. But at least these synth parts are not long, just a few seconds so it’s not that bad. The last song is an instrumental called ‘Stop The Christianity’ and features high speed erruptions, twisted rhythms, slow and moribid riffs… an excellent tune. BESTIAL DEFORM really vary their songs as much as possible without leaving the basic roots of Death Metal. A solid underground release. So all maniacs who are into excellent blasphemous Death Metal sounds and not into bands from USA or Scandinavia only should give this quartet a try and check it out. I will keep an eye on that outfit and would like to hear more from them in the future! Get in touch with the band at www.bestialdeform.ru, email: valkyr@mail.wplus.net.