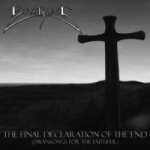 BITTERNESS
The Final Declaration Of The End (Swansongs For The Faithful)
(G.U.C.)
43:45min

3 years after their last full length southern Germany loacted BITTERNESS (2 members of BITTERNESS also play in the German Black Metal band UNLIGHT) return with their 10th release since the founding in 2001. This three piece is an absolutely honest German underground act that sticks to their particular style for years now without taking care of major movements or trends within the scene. I sometimes wonder why they never made it bigger because the band constantly played tours, weekend shows etc., but all in all it’s hard to gain attention nowadays if you do nothing necro or fitting into a certain kind of image. This is about pure Thrash Metal with Death Metal elements. Their productions have grown throughout the years and in terms of sound, “The Final Declaration Of The End” is their most matured work so far. Recorded, mixed and mastered (again) at Iguana Studios (FRAGMENTS OF UNBECOMING, DEADBORN, NECROPHAGIST etc.) this one really has a tight and powerful sound. The drumsound is actually a lot more modern than known from the classical German Thrash style. I miss some more energy in the backing and double vocals, they sound a bit lame to me. Musically the opener ‘Killing Mind’ sticks totally to KREATOR in their more new vein (comparable to the “Violent Revolution” era). Surprisingly ‘Face To Lie’ comes with some Florida Death Metal elements, a really brutal and outstanding track. The titletrack itself is totally hold in the mid 90s Gothenburg style, packed with tons of reminders to old GATES OF ISHTAR, ABLAZE MY SORROW & co. Another surprise are the more “newer” DEATH like leads in ‘One Way Ride’. The songs for themselves really have some surprising moments and remarkable elements as well. It works really well and as you see in the references BITTERNESS plays a really varified form of this style. It’s nothing for purists, but expect well executed and dedicated material. Fans of bands like SKELETON WITCH or GUILLOTINE really should give this one a try. At least there’s one major thing that I have to argue and that’s the general way of presentation: cover and layout (the size and quality of the font is totally fucked up) looks like a “do it yourself” demo and this doesn’t reflect the quality of the music. It makes a sort “unprofessional” first impression, which maybe harms the reputation of the music in an unnecessary way. Think about that next time!!! Ah, one thing not to forget: the CD version features a re–recorded version of their first 4 track demo from 2001 in the bonus section and for all for all South Park fans; I’ve noticed some Eric Cartman samples in the intro! Fans of above mentioned bands: this BITTERNESS release can be yours at www.guc-area.de.