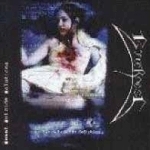 This is the third demo CD by BITTERNESS from Southern Germany, who are obviously very committed to what they are doing because packaging and sound are on a very high level for a self-financed release. They play a blend of old school Thrash / Death / Black Metal, strongly inspired by the late 80s / early 90s. The raspy, hysterical vocals have parallels to Mille from KREATOR, while the music is a strong combination of the three aforementioned Metal genres, Death / Thrash riffing meets melodic Death / Black parts. The generally convincing performance is somehow reduced by the three acoustic guitar instrumentals between the regular songs, which are ok but a bit superfluous, one or two more songs of the same quality as the other 7 songs would have been a much better idea. As little surprise there is a superb cover version of SEPULTURA’s ‘Troops Of Doom’ as a hidden track at the end, cool! Altogether both thumbs up for BITTERNESS, who undoubtedly will continue their way throughout the underground and maybe even beyond. The price of "Sweet Suicide Solutions" is 8 Euros and it can be ordered at Frank Urschler, Leinerstrasse 18, 78462 Konstanz, Germany. Webcontact: www.bitterness.de