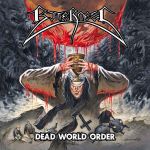 BITTERNESS have a long history now, this being their seventh album since their formation in 2001 from the ashes of STEEL TORMENTOR. ‘Dead World Order’ is varied in speed and approach, but from beginning to end it’s a very competent Thrash album. It is sometimes rather melodic, like in the title track, but they also know how to go full throttle whilst keeping their technical delivery. Even if the guitars often remind me of post-eighties KREATOR, truth is this German trio’s sound is generally speaking closer to the old Bay Area bands than the more aggressive and less polished traditional German Thrash. The album is a bit of a riff extravaganza, with carefully wrought tunes that will have a lot going to convince any Thrasher worthy of the name. The vocals, mainly some wails here and there, sometimes remind me of SACRED STEEL’s Gerrit Mutz (whose vocal personality I have always enjoyed). The production is fine and boosts the strength of the instruments, which are very aptly handled – surely their long and prolific activity has paid off, as they know their way around with them and always sound very tight. Some tracks, like ‘None More Black’, clearly reveal a band that will tread off the beaten path, indulging their melodic inclinations and their wish for complex structures. More than brutality (also very much present in furious tracks like ‘Idiocracy’), they rely on their musical abilities, but never treading far from the definite realm of Thrash Metal, except perhaps for their closing instrumental, ‘Darkest Times’, somewhat calmer and mood-setting but, equally, very well composed and carried out. Go find more about them in www.facebook.com/bitternessthrash, www.facebook.com/guclabelmailorder