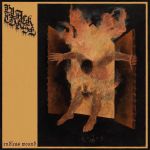 In such a time of perilous dread and dismay, it may sound like a fascinating coincidence that BLACK CURSE released their debut full length “Endless Wound”, but in reality it has been over five years in the making and the band itself has taken on different forms over the years. MALIBLIS was the initial version of the band, formed by the members of PRIMITIVE MAN, BLOOD INCANTATION, SPECTRAL VOICE, KHEMMIS and they recorded only a one-song demo with that name before changing into the current form of BLACK CURSE. This switching also brings changes responsibilities and subsequently changed the sound quite to another level, which was evident in their debut demo also named as “Endless Wound”, released in 2019 in co-operation with prestigious Sepulchral Voice Records. This revamped line-up of BLACK CURSE with singer and guitarist Eli Wendler (SPECTRAL VOICE), guitarist Jonathan Campos (PRIMITIVE MAN), bassist Morris Kolontyrsky (BLOOD INCANTATION) and drummer Zach Coleman (KHEMMIS), possibly birthed something very different and wholly unique from all of their other renowned associations, which is lot more ferocious and barbaric; more importantly sonically, lyrically and holistically have its distinct identity. In this period, when the lines between Black and Death Metal blurred, how should we describe the sound as a whole? Saying this as a combination of second wave Black Metal, late first wave Black Metal (second wave mixed with evil Death Metal from the 90s) and the likes, it’s too broad! Or looking into this as did, they tried to add something new to the pot rather than just start another project band, like many similar cryptic Death Metal bands at the end of the day. But BLACK CURSE answered, “does it needs to sound like this style of Death Metal or this style of Black Metal.” Or it’s more, “does it have an atmosphere? Is it evil?”. The opener ‘Charnel Rift’ leaves no questions unanswered in terms of style. Here you can hear mangy Death Metal, which Arthur Rizk (SUMERLANDS) has given a correspondingly twisted sound. BLACK CURSE also skillfully reduces the pace in places to bring in minor nuances of Death Doom, which ensures variety and enthusiasm. ‘Enraptured By Decay’ or the opener ‘Charnel Rift’ offer great Doom moments that would be fantastic in a lousy DIY basement in front of hundred people. Sometimes even memories from great classics are awakened which manifests itself in the bass-heavy ‘Enraptured By Decay’, the hilarious vocal effects of ‘Seared Eyes’ or in the unleashed start of ‘Finality I Behold’ or the rather short instrumental ‘Lifeless Sanctum’ which consistently in mid-tempo. Altogether, in less than 40 minutes, “Endless Wound” is a vehicle for various through-currents, that revolve around chaotic or destructive forces and with the evocative cover drawing by Denis Forkas (BEHEMOTH, GRAVE MIASMA, CASTLE) and layout design by Patrick Tauch (VENENUM), the force of BLACK CURSE explored the darker aspects of mind and humanity which shall impact each soul exposed to this prolific and innovative creation. Find out more about the release at https://blackcurse.bigcartel.com or visit their label page at www.sepulchralvoice.de.