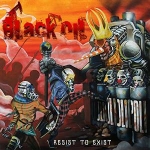 A Brazilian band, relocated to L.A.? Looks like the guys from BLACK OIL are out to raise some attention. “Exist To Resist” is the third album, as far as I found out, from this band and after listening to it, I hope they won’t gain too much attention. Why? Because this album is incredibly lousy. I mean, trying to sound like a mix of early FEAR FACTORY and “Roots” era SEPULTURA might not be illegal. Yet it is a sound that’s getting on my nerves within a few seconds. And it won’t get better with high-profiled guests like Tony Campos or Raymond Herrera. Even the political attitude of BLACK OIL doesn’t really help here. “Exist To Resist” sounds very random in riffing and songwriting. Only ‘Stand Against Everything’ with its vibe of Brazilian native folklore raises my attention a little bit. But not too much. BLACK OIL are trying to find the “Soul Of A New Machine”, but they’re still searching and with an album like this, they will never find it anyway. Look for yourselves here: www.facebook.com/blackoilofficial, www.blackoil1.com or www.sliptrickrecords.com