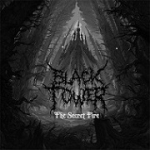 Sometimes, once in a time, a band that is supposed to be hated by your truly, surprises me with something. It is hard to understand what and how it works. That is the reason I like bands like GWAR, ATLAS LOSING GRIP or AVALANCH no matter how far they are from my usual Death / Black Metal dose. BLACK TOWER from Canada presents here their debut album of something that could be a very commercial and radio-friendly metallic Punk / Hardcore thing, and even with that in mind, there is something with this band that makes them very good. Although for this to be commercial, the cover art, lyrics and overall aura is very dark, funeral-like and somber. And maybe a bit too fast for that market. The very simple riffs and in your face vocals are shared by a female guitar player and male bass player (which by the way both sound similar in approach, melodic with some anger sound in between). There is a very strong sense of Heavy Metal in all their songs and the band is smart enough to have different tempos, and mixing many other Metal styles with such ease it is almost scary, just check out the song ‘Shadows’ which has a lot of Black Metal sound in it, even vocally. Some might say they have also a Post Rock sound all around. The songs are so catchy that no matter what style the band is covering, you will find yourself whistling some of those riffs. Yes, I like this no matter what style it is. I suppose it has something to do with the aura of darkness the band embraces with such ease… www.facebook.com/blacktowergates, www.unspeakableaxerecords.com