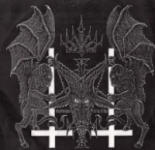 In times when each month thousands of official CDs get released by the labels all over the world some might ask who needs to order rehearsal demos without a professional recording from the band directly. Honestly spoken, no one needs that, but did someone really need that 15 years ago? So why shouldn’t something what worked then not work today, too? So if you aren’t interested in getting in touch with a band directly but prefer to buy your stuff via Amazon or other mailorders I suggest to stop reading this review now and go to check out another page. If you’re interested in new hopefuls you’re at the right place here. BLASPHERIAN from Texas are a pretty new outfit presenting us their 2nd demo, actually a rehearsal tape called “Summoning Of Infernal Hordes” which includes four songs of brutal, tight and heavy Death Metal taking influences from such acts as old Slayer, Possessed, Immolation or Incantation. For sure you can’t expect an up-to-date hi-fi-sound here, nevertheless you can recognize huge potential while listening to these songs. As far as I know the next release should be the MLP “Allegiance To The Will Of Damnation” released through Swedish Blood Harvest Records and I’m sure this will prove the quality of this band and I’m really looking forward to hear their tunes in a professional studio sound. Get in touch with them (blaspherian@hotmail.com) for ordering details of this demo and / or check out www.myspace.com/blaspherian for further information and songstreams. Did I say that the cover of this demo reminds me somehow to GROTESQUE’s “Incantation” MLP?