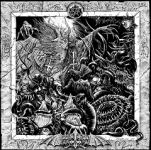 It’s been a busy year for Houston’s BLASPHERIAN, who can now celebrate their 10 year anniversary. Some things get better as they age, and like a fine wine, I think BLASPHERIAN is better now than they were on their debut LP "Infernal Warriors Of Death". It’s a great record, but this is better! For this release there is one song per band. ‘The Blessings Of Sanctity Rescinded’ is BLASPHERIAN’s track, the first taste of new material since the departure of Lord Apollyon the former singer, and the return of original singer Desekrator (some of you may know him as Sawblade, the artist). Like I mentioned, it’s a strong track: a flame that grows in size and intensity as it goes. It is a stentorian and penetrating sound. The strength builds from the first riff as the other instruments announce their presence, a couple of hellish verses, and then they’re off. I find the song is just plain arranged well, the riffs resolve and progress, never overstaying their welcome but never letting you forget their presence either. It also features the first guitar solo, courtesy of Wes Infernal, that I’ve heard in a BLASPHERIAN song. As a whole the song feels like you’ve entered a moment in Hell, where demons are briefed on the coming assault against Heaven. Or something. The point is, you need to hear this shit! They sound reinvigorated and about to hit a second stride if they haven’t started already. And it is the third straight release of the year, the first being a compilation of the "Summoning Of Infernal Hordes" demo and the "Allegiance To The Will Of Damnation" EP, and the second an EP entitled, "Upon The Throne Of Eternal Blasphemous Death". IMPRECATION’s side of the split is no different in quality: an excellent song from a classic band and never mind that it isn’t the same band it was in 1993. Their new material, starting with the 2010 release "Sigil Of Lucifer" (kind of a companion EP to 1993’s "Sigil Of Baphomet") is true IMPRECATION material and does the old songs as well as the old members a lot of credit. This record is already worth having because of BLASPHERIAN but this IMPRECATION song, ‘Unlock The Ancient Portals Of The Faceless Lord’ makes it nigh indispensable. The intensity and execution is unrelenting. The brief keyboard intro gives way to a demonic sound off and the song hits the ground running. Unlike BLASPHERIAN, IMPRECATION has always used guitar solos here and there and this track has one of the loudest and fucked up solos yet (courtesy of Archfiend, a newer member). But my favorite part bar none is the melodic riff midway through the song. At the close of the song, the tone is especially dense; makes it sound like a ton of searing hot volcanic ash has enshrouded and entombed a village. It’s like Pompeii all over again. I’m also impressed with the vocals. Dave Herrera is an old school, original member, but you wouldn’t know it from the recording. He sounds as wicked as ever. Same with Ruben Elizondo, the original drummer. This is the fourth release since the band reformed in 2009. If this EP is any indication they will continue to release high grade, satanic Death Metal in the years to come. Check this release out, BLASPHERIAN and IMPRECATION do not let their listeners down! www.facebook.com/pages/imprecation/194725213915960, www.facebook.com/blaspherian, www.darkdescentrecords.com