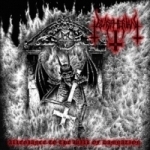 BLASPHERIAN
Allegiance To The Will Of Damnation
(Blood Harvest Records)
25:55min

After their "Summoning Of Infernal Hordes" reh. demo 2006 (see review above) BLASPHERIAN from Texas/US return with their MLP "Allegiance To The Will Of Damnation". Finally I’m able to hear them in a better sound quality as on their rehearsal demo, nevertheless I think that the sound still could be better. BLASPHERIAN return with this 5 track Mini LP released through my beloved fave label Blood Harvest Records. I can only say, everything what Rodrigo (chief of Blood Harvest Records) did so far was utterly amazing. But what about BLASPHERIAN? I enjoyed them on their rehearsal demo, but complained a little bit about the sound. Well, as I said I’m not really satisfied with the sound on this recording either, still I think that this not so crystal clear sound suits them very well. BLASPHERIAN remind me on this recording a lot of a gloomier version of old IMMOLATION in their "Dawn Of Possession" days. The guitars are ultra deep and with their rhythm based and propulsive riffing the guys deliver a truly dark sounding and evil mixture of Death Metal. I should add that this mixture sounds in my humble opinion quite unique and outstanding. BLASPHERIAN sound in every single moment true to them and create a brand of music which simply sticks to the underground Death Metal scene. This is by no means a release for Death Metal fans who are waiting for the next ordinary Death Metal release which we get hundreds each month, not a release with triggered drums and glass clear sound, this is an underground release with all its rough edges. That’s how it is supposed to be. Musically this is something for the lovers of the American Death Metal scene, for fans who still think "Dawn Of Possession" is IMMOLATION’s best release to date!! Besides this cool music you get a layout far above the average: a black / white drawing done in a very professional and artistic way. Probably the cover was the impulse to release this recording on vinyl as it would be a shame to see this drawing on a tiny little CD-booklet. This release is another strictly limited edition of 666 hand numbered copies, so better be fast and order it today at www.bloodharvest.se. 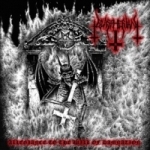 BLASPHERIAN
Allegiance To The Will Of Damnation
(Die Todesrune Records)
32:37min

Texas rarely, if ever, lets the underground down. Always churning out something tasty, the Lone Star State’s latest and greatest achievement is BLASPHERIAN, consisting of long-time scene veterans, including former members of IMPRECATION. There are very close parallels between BLASPHERIAN and IMPRECATION, but BLASPHERIAN stand on their own as masters of dark, evil Death Metal in their own right. Not particularly slow, nor fast, the band balances between the two extremes with unquestionable finesse. This is true of many a band, but whether fast or slow, the one thing that sets BLASPHERIAN apart is their heaviness. That is to say, heaviness with regards to the punishing weight and resonance of the riffs. INCANTATION, to name one of the few American bands who does this, made similar use of heaviness in their music. I don’t mean to suggest that BLASPHERIAN are one of the exalted few who know the only way to write Death Metal, but rather I mean that their approach is rarer to hear than you might think. Mixed with the vocals, the thundering drums, and the plodding weight of the gristly guitars, heaviness is at an all time high on this EP. One is left with an imprint of BLASPHERIAN, rather than an impression. This MCD edition includes 2 bonus tracks (‘Of Unholy Blood’ and ‘To Walk The Path Of Unrighteousness’) from the band’s split EPs with ADUMUS and EVIL INCARNATE. More info: www.myspace.com/blaspherian, www.myspace.com/dietodesrune