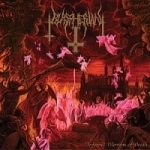 After two demos, two splits and the "Allegiance To The Will Of Damnation" EP, US Dark Death Metal quartet presents us their much acclaimed debut "Infernal Warriors Of Death" on Deathgasm Records. Where the EP totally convinced and pulverised, this one left me puzzled. Something is missing here. The production makes it sound like a Finish Death Metal band from the 90s, but also holds too much back on the vocals and guitars. The main element here is an dark and evil brutality. Nothing wrong with that of course, but with this style of riffing it’s manifesting on a certain downtuned level and just stays there. It kind of drowns things. Also the vocals lose the same impact as they did on "Allegiance…". The songwriting let’s it crawl along despite it’s not particular slow and offers some fierce speed outbursts. Sometimes it reminded of a faster version of the long forgotten SORORICIDE. The bass is upfront but follows a similar path as the guitars. Still, this is a hell of a slap of old school Death Metal and I would suggest to check the links below first before purchasing. Every worshipper of dark, obscure Death Metal with a playlist that consists of IMPRECATION (guitarist Wes Infernal used to be part of this band), the first INCANTATION, PURTENANCE, DISMA, INFAMY, MORPHEUS DESCENDS, GRAVE RITUAL, GRAVE MIASMA, FUNERUS, DRAWN AND QUARTERED, BURIAL INVOCATION and others are pretty safe. www.myspace.com/blaspherian, www.deathgasm.com