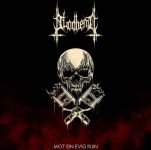 "Mot Ein Evig Ruin" is the third album for BLODHEMN. It consists of an interesting intro – the kind of intro that actually serves as a coherent opener for the album – and seven mostly relatively lengthy songs. Each of them has a Norwegian title so I guess it’s safe to assume that the lyrics are in Norwegian as well. The speed is mostly blistering, but not throughout. It kind of makes sense, seeing as it’s a cross between Black and Thrash Metal. Which means plenty of palm muted riffs and blast beats but that doesn’t mean there aren’t parts that catch you by surprise, for example a "voivody" riff in the third song on the album, ‘Dogenikt’. Keeping up with the Thrash tradition we are also treated with the odd guitar solo. As for Black Metal part besides the already mentioned blast beats there are, of course, tremolo picked riffs, sometimes laid "under" the verses, other times "driving" the songs. The vocals are pure Black Metal as well, executed in a way that’s not that much out of the left field for a Norwegian band. The sound is crystal clear – the guitars sound powerful and the drums thunder away. Which means it’s really hard to miss anything and that’s a good thing. As mentioned before, the songs aren’t really bursts of speed, but varied compositions that take the listener for a ride. It would be easy just to go "full out", but in this case we are treated to well crafted and thus excellent representative of its breed. More here: www.facebook.com/blodhemnnorway, www.soulsellerrecords.com