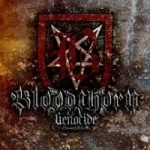 Considering the straight ahead heaviness of BLOODTHORN’s material these days, it’s kinda hard to imagine that this Norwegian bunch actually used to kick off their career with keyboards and female vocals (perfectly documented on the band’s two full length albums “In The Shadow Of Your Black Wings” and “Onwards Into Battle”, as well as on their split MCD with … AND OCEANS). I never really cared about them in those days, so that 2001’s “Under The Reign Of Terror” album really took me by surprise. That record definitely used to be a major turning point in their history for it offered nothing but brutal, yet blackened Death Metal! Almost five years later the band returns to the scene with a slightly changed line-up (the guitar players Alex and Tom got replaced by MAYHEM’s live guitarist Ihizahg, who also wrote most of the new material), delivering an even more impressive follow-up! Musically “Genocide” is without a doubt the next logical step in their evolution and in every aspect once again far more devastating than “Under The Reign Of Terror”! After I had been playing the disc a couple of times, I quickly felt reminded on ANGELCORPSE (for the harsh vocal delivery and overall raw attitude) and the intensity and monstrous riff-based heaviness of BOLT THROWER / SLAYER. Instead of adding various little bits and pieces or dark atmospheric elements to the songs, the new material convinces through a refreshing stripped-to-the-bone writing style, that focuses on thunderous riffs (the midtempo passages really kick some major ass!) and straight ahead aggression first and foremost! The production (courtesy of Knut Prytz, Godt Selskap Studio) really compliments this in the best possible way, so that “Genocide” is a highly recommended record from my side! For all further info, feel free to check out the following websites: www.bloodthorn.net, www.morningstarrec.com, www.redstream.org

BLOODTHORN - Under The Reign Of Terror - by Frank Stöver