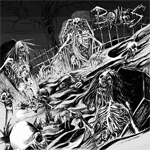 BONES is a three piece act from the Chicago scene that is comprised of Joe "Apocalyptic Warlord" Schaeffer on drums, "Carcass Chris" Svoboda on guitars and Jon "Necromancer" Woodring on vocals / bass. These guys not only gained a lot of past experiences in bands like USURPER, THE DEAD YOUTH, ETERNAL HATRED, KOMMANDANT and NACHTMYSTIUM already, they collectively all played on the last USURPER album "Cryptobeast" from 2005 as well. When USURPER split up in 2007 the three of them all went separate ways, but by the end of 2009 they finally got together again in BONES, followed by the release of their self-titled debut album in 2011. Instead of just coming up with a continuation of the established USURPER style these guys went for a lot more furious and straight ahead Crust influenced Death Metal direction in BONES, that I personally like way more than anything that USURPER ever recorded! Even though they musically have nothing really in common with New Jersey’s WHIPLASH, the extremely high energy level on the album often reminds me on the classic "Power And Pain" album in that respect. BONES is not about complexity or high tech production, this is nothing but right into your fuckin’ face, heavily crushing aggression! All of the songs are raw and simple, but they still offer remarkable riffs, over the top (partly fast, partly D-beat type) drumming and a very pissed off vocal delivery. You can easily hear that these guys are playing this stuff straight from the heart and by including a cover of ‘Apocalyptic Warrior’ (originally from Chicago Thrash legends DEVASTATION), they not only prove their great taste in music, but also manage to deliver a version that even makes the original sound pretty lame! And the icing on the cake is the (once again) excellent cover artwork from Putrid… So, to me this is without any doubts one the coolest releases in the Crust / Death / Thrash genre for quite a long time and therefore already destined to end up in my best of 2013 list for sure! I’ve found a couple of songs on Youtube, so make sure to check them out: ‘Bloodlust‘, ‘March Of The Dead‘, ‘Good Die Young‘, ‘666‘ and ‘Lonely Death‘. For all further info on BONES go to www.facebook.com/pages/bones-chicago/113666132032091 or check out the label at www.facebook.com/planetmetal