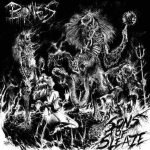 You want pure rawness, filthiness, sleazy uncompromising crusty Death Metal without any wanna-be bullshit, played by Chicago’s filthiest underground trio at the moment? You got it – you got BONES. These merciless, furry beasts have been unleashed, for the 2nd time within just 2 years. Most of you are probably already aware of the fact that BONES has raised from the ashes of Chicago’s blackened Metal warriors USURPER, containing of 3 ex – USURPER members (i.e. Jon Necromancer on bass and vocals, Joe Warlord on drums and vocals and Carcass Chris on guitar and and vocals). BONES’ self-titled debut album that was released on a small underground label Planet Metal in 2011, could be said was an immediate success among the underground Metal circles. BONES made the kind of bold statement on their debut already that they could never be linked to any trendy, polished sounding or artsy-craftsy bullshit that the modern (Metal) music produces so much nowadays. BONES have raised their big middle fingers against everything trendy, fashionable and wanna-be ever since they put this horde together back in 2009 – and have continued that already started crusade against any musical commercialism on their follow-up record, "Sons Of Sleaze". BONES sound on this particular record like they could exactly sound live; very energetic, punky, angry, pissed-off, brutal, sweaty, unrelenting and simply irresistible. There’s some hints of AUTOPSY, some hints of CELTIC FROST, tons of old VENOM, some grinding moments of REPULSION and shit, incorporated into the sound of BONES – and these aforementioned ingredients can also be found from this BONES’ new collection of filthy cuts. It’s actually really amazing and rare these days that there a handful of bands out there that can create something this authentic, vibrant, barbaric sounding and highly energetic stuff as Chicago’s BONES can. Then again, it’s no wonder why these men in BONES ended up naming this record as "Sons Of Sleaze". Just try to find any better or more fitting title than "Sons Of Sleaze" for this album, as that’s what BONES are first and foremost all about: the undisputed and uncrowded kings of bloody and loud sleaze. A song like very VENOM-ous ‘Bad Signs’ makes me want to crush neighbor’s shiny and fancy Cadillac – and BONES’ own cover version done for one of the most ass-kicking TERRORIZER songs ‘Fear Of Napalm’, is simply beautiful in all its crudity. Oh man, gotta love this band… hell yeah! More tasteful dirtiness and sick filthiness are shared at: www.facebook.com/pages/bones-chicago/113666132032091 or check out the label at www.facebook.com/planetmetal