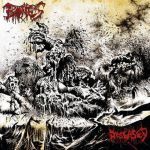 I have always been a huge fan of the Chicago scene and the bands that have come out of it particularly: CIANIDE, USURPER, SCYTHE, MASTER, DEATH STRIKE and BONES. It has been well over 6 years since BONES released an album, so when I saw that their new release needed a review I jumped on board. Now for those of you that are not familiar with BONES here’s a quick breakdown; USURPER called it quits and basically 2 bands appeared from the ashes: BONES and SCYTHE. Both bands are excellent and carried the torch. BONES would issue out their self-titled debut in 2011 and followed up with 2013’s “Sons Of Sleaze”. BONES’ sound is Death Metal and has at times hints of USURPER, with that being said let’s dive into the 11 skull bashing hymns on their new slab “Diseased”. Things kick off with the track ‘Blood, Diarrhea, And Tears’, a simple yet thrashy jam that brings about what we have come to expect from BONES. The band keeps the formula the same since it has been tried and true. The next song is ‘Mass Grave’ which picks up where the previous jam left off and to be honest, I didn’t even realize I was on song 2 until I looked at my player. The drums really come alive on ‘Carrion Crown’ and is full of fast guitars, the vocals are nice and harsh. The guitar solos at the 1:50 mark are chaotic but in a good way. ‘Diseased’ (the song) was a real ear catcher and my personal favorite with its catchy hooks, heavy drums and headbang inducing guitar riffs. A solid choice to carry the album title and one that stands out from the pack especially with that nice little bass guitar solo at the 2:28 mark. ‘Stench Of Disease’ plays right after and once again has some crushing guitar riffs. ‘No One Matters’ starts off with a Hardcore – esque guitar beat but then quickly jumps back into the thrashy sound. Things slow down a bit with ‘Broken Wheel’ but don’t think this is a filler song as it has a good beat. ‘Crucifier’ was a bit too short for my taste at under 2 minutes. Final verdict; this is a must have for fans of USURPER and of the first two BONES albums. It’s a good album that has a lot to offer for fans and will definitely get your neck sore from all the jamming out you will do. My only gripe is the bass drums sounded drowned out by the other instruments and at times by the vocals. I really enjoyed it and just hope the band doesn’t take another 6 years to unleash another slab of sickness. The chaos that is BONES thrives for those that wish to enter the realm of the DISEASED! For more info: www.facebook.com/bones-chicago-113666132032091, www.facebook.com/transcendingobscurity