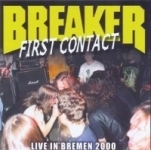 It was a night to remember… The year 2000, Wednesday, the 2nd of August: Cleveland’s Metal legend BREAKER paid their first visit to old Europe, 18 years after they started, 13 years after their legendary album "Get Tough". They were to play the legendary Wacken Open Air and two days before, they played a so called warm-up show in a place everybody wasn’t expecting. The club Meisenfrei in Bremen was known for nice Blues Rock shows or old school Hard Rock and AOR. But true Metal? Not really… But it was the truth – BREAKER were there, their first show ever in Europe and it even took place in my home town. No chance of missing it, no acceptable excuse to miss their "First Contact". People even came from Southern Germany to see them… As I said – a night to remember! But I never knew that there was live recording made that night… And now, twelve years later, Auburn Records released these recordings on a CD. No overdubs were used, no big production was made up… It sounds like it was taken directly from the soundboard to the disc, with no cuts or shit like that. This means: perfection was sacrificed for authenticity. But does it matter? A definite no!! The band is tight and Jim Hamar sings like a young god, even when he gets support by Dirk Stühmer (PERFACT CRIME, now ETERNAL REIGN) on ’10 Seconds In’. And at the end, we get a furious version of BREAKERS all-time-greatest-hit ‘Still Life’. I remember kneeling on stage during this last encore… To make it clear: This is a must for everyone who loves old US Metal in common and BREAKER in particular. Check out: www.auburnrecords.com to find out more about this night to remember.