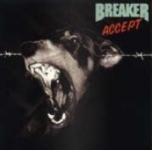 After nine years of inactivity, Cleveland based Auburn Records has finally returned to the scene with a new release. And the choice couldn’t be better! The “Accept” entitled, quite lengthy EP (with a playing time of approx. 30 minutes) by legendary melodic Heavy Metal masters BREAKER will certainly appeal to a lot of underground Metalfans. It features a brandnew recording, the welldone cover of the old ACCEPT classic “Breaker”, two tracks off their soon to be re-issued “Get Tough” album (the alltime classic “10 Seconds In” and the “Heavy Artillery” compilation track “Still Life”) and a couple of previously unreleased demo versions, dating from 1982 and 1990. The coverart will bring a smile on the face of every longtime Metalhead, as it’s a parody of ACCEPT’s “Breaker” sleeve. BREAKER still have a die hard following (especially overhere in Germany), even though “Get Tough” originally was released more than ten years ago, which undoubtedly speaks for the high quality of the band’s material! These guys just knew how to come up with strong compositions.Their combination of clear melodic vocals and powerful traditional Heavy Metal could’ve been a strong foundation to build a longlasting career on. Unfortunately several problems stopped the band on their way to the top and a second album never saw the light of day. But at least “Get Tough” will finally be re-issued in January as a double CD set with a bunch of bonus tracks, so watch out for that! The first pressing of this limited edition EP sold out immediately, but don’t worry – a second pressing is already available and that even features an additional “secret bonus track” (a demo version of “10 Seconds In”)! So, don’t hesitate too long and make sure to buy it!!! If you can’t find it in your area, contact Auburn directly for further ordering information at: Auburn Records, P.O. Box 925, Medina, Ohio 44258-0925, U.S.A., e-mail: auburn833@aol.com, website: www.auburnrecords.com