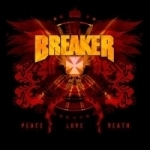 BREAKER’s latest offering comes to us comes in a collection called “Peace Love Death”. What we have here is a full length CD composed of four new studio tracks, cover songs, and live material. This was initially released to coincide with the group’s appearance at the “Bang Your Head!!! Festival” earlier this year. The assault begins with the new studio material starting out with ‘Black Light Ark’, a real ballsy mid paced powerful number, with the slugging chorus of ‘Peace Love Death’ (hence the name of the CD). Up next is ‘Satellite Dog’, a straight ahead hard rockin’ track that has more of a ROSE TATTOO (and somewhat AC/DC) vibe to it with catchy hooks. The songs ‘Luck And Gasoline’ (the more up beat and faster of the new stuff) and ‘One Thin Line’ (a formula of up beat, mid-paced, and slower riffing) finish up the new stuff on a real positive note, proving that these Cleveland, Ohio stalwarts from the 80s can still rough it up with the best of them. Next we enter into the cover song zone with a version of UFO’s ‘Too Much Of Nothing’ featuring UFO’s own legendary bassist Pete Way, a pretty neat cover to do if I say so myself. Following through are very respectable renditions of ‘To Hell And Back Again’ (by SAXON) and ‘Pictured Life’ (by SCORPIONS), which has original BREAKER lead vocalist Jim Hamar on the later. Hamar also sings on the next track, a very different slowed down crunchy approach to ACCEPT’s ‘Breaker’, which strays very far from the way the original version is done, though still very effective. The live portion closes out the disc with ‘Black Light Ark’, ‘Action’ and ‘Standing In The Light’, all recorded live from Cleveland. The final song here is ‘Still Life’ live from Headbanger’s Open Air Festival in 2004, which ends in distortion and noise which is allegedly the band smashing up their equipment on the stage as the closing finale of that show and this CD. This is definitely a nice array of bare knuckles material from this barbwired balls, street Metal outfit who continue to grind out and deliver their own brand of hard drivin’ quality music. A big salute goes out to Bill Peters for his continuing efforts of feeding us with excellent releases through his Auburn Records label. www.auburnrecords.com