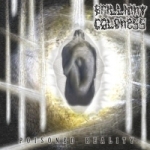 Originally released in 2006 by Eternity Records, I keep asking myself a really good reason to re-press this album. BRILLIANT COLDNESS, which if you ask me is a quite weird name, plays the kind of technical Death Metal with dangerous mosh/core sound that many Death Metal bands in that technical style devour. Traces of DEATH, CYNIC, and CRYPTOPSY and so on can be found here. I must admit, that they sound VERY tight; they have a powerful production, a heavy and pounding guitar sound, and precise drumming. Still, most of the time, this sound without a soul. I have always felt that there is a contrast between Death Metal and a too precise performance; you see, whereas death might be cold, grisly, burning, fast or slow, it is by all means unpredictable. Transformed into music, I can only foresee more brutal and less technical sound. Few bands can achieve a technical sound and still be a brutal Death Metal band, as they sometimes get lost that much in proving how many “figures” and “passages” they can put in a song rather than creating memorable riffs. It is not that all is lost, as they have some heavy and, yes, even brutal songs like in ‘Cobweb Of Self Destruction’. I have to give this one several spins to try to “catch” the idea of the band, and few things have changed. I can foresee that yes, the main core of the band is Death Metal, but as with some of the aforementioned influences, when something sounds to precise, technical and tight, something gets lost. Vocals are also a bit one-dimensional, and they tend to use a lot of that start-stop-start thing. Although most of us dealers of extreme music sounds are actually looking for a good performance, sometimes too much is not that good. And whilst this is not the most technical band I have heard in the style, neither it is one of the best. There is still room left in the creation department to reach the level of bands like SCEPTIC or even NECROPHAGIST that whilst being technical and somewhat complex, they let the metal flow in a more unrestricted way. Still, this is for now a 4 years old recording, and for some parts contained in songs, if the band keeps its focus, we might in for a surprise in the next recording. So far, this is just interesting for fans of more technical / progressive bands. Unless they are able to create more with their (rotten) hearts than with tempos, straight ahead Death Metallers should proceed with (technical) caution. www.myspace.com/brilliantcoldness, www.apollonrecords.nl