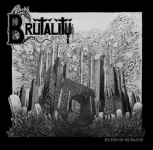 BRUTALITY are back! In the last years, a lot of the very early Death Metal bands have been resurrected and some of them have released some proper material like CARCASS or CONVULSE. You can start to blame them all as money grabbers, but if you are not AT THE GATES or CARCASS, there is not really much money to earn, we all know that. Also there is the risk to destroy your reputation of the 90s with releasing some poor material, which can not live up to the old quality. So BRUTALITY decided to leave this anxiety behind and reformed in the classic line-up of their 1993 masterpiece "Screams Of Anguish". Even their old original logo found its way back onto the cover. But what can we expect from that band more than 20 years later? The answer is easy: an old school technical Death Metal bombshell. 90 seconds after the start of first track ‘Ruins Of Humans’ it feels like being back in the 90s. The vocals of Scott Reigel move between guttural grunts and screams. The brilliant and melodic guitar work of Don Gates and Jay Fernandez is perfect and lifts us straight back to the band’s best times. Also the bass work is very technical and sometimes reminds a bit of mighty Steve Digiorgio in his best times. The drumming is fast and the pounding double bass is working as a ticking clock in the back. The second track ‘Irreversibly Broken’ is very melodic with tons of technical melodies but also brutal riffing. This killer track is a good mixture between old school brutal Death Metal and the now more popular melodic Death Metal, but still sounding old school. Both tracks could easily have fitted onto "Screams Of Anguish" or "When The Sky Turns Black" and show the band in an absolute perfect condition. I am curious to hear the next full length, this is a real killer appetizer. www.brutalitytheband.com, www.facebook.com/brutalitytheband