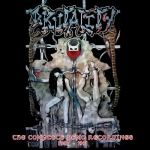 BRUTALITY, the legendary Death Metal band, was formed in 1987 in Tampa, Florida. What we have here is the summation of the band’s work over the course of 4 years, 1987 to 1991. This 2 CD release has 42 tracks in total! Yes, you read that right, 42 in total! How do you review such a compilation? I thought of it long and hard and wondered what I as a fan would like to read? Well, everything’s written about the band already, their demos are fantastic. Considering the size of the release that Vic Records has put before us, it’s only logistically fair that I give each timeline a view. So, let’s do this! The compilation opens with their 1991 demo “Metamorphosis”, a tight as hell Florida Death Metal output which frankly should occupy one of the top spots in terms of demo greatness. Evil! Absolutely evil! The band’s just raging with hate and anger, which they translate to some primitive Death Metal with excellent execution. It is a joy to listen to such music and BRUTALITY know exactly what they need to do and leave no stone unturned. As an aside the demo “Metamorphosis” was recorded at Morrisound Studios, which perfectly sets the expectation. Moving on, we have a home recording of the same demo, which, well, is a home recording! The musicianship credentials are validated from time to time on such releases, the band needed a stage and a studio to bring this dream to a reality. This home recording obviously does not live up to what was recorded at Morrisound, but surely provides a good view into the capability of the band. Moving on, the next 14 tracks are from a 1990 live recording, which was originally released in 2002. The only missing track here from their 2002 release is a LYNYRD SKYNYRD cover, which I frankly don’t care about. The band puts up a fantastic show and the recording quality is quite fair too. Considering how last year was, this portion of Disc 1 instantly takes you to your home gigs, this is the exact setting, so it is actually quite welcome to listen to this version of the proceedings. If you’ve ever heard Death Metal on tape, this is your jam! As we move to CD 2, the opener is “Dimension Demented” their 1990 demo, the band sounds so good, that this could’ve potentially been their first full length. The first track ‘Dimension Demented’ is an instrumental and what a bloody way to kickstart the demo. No holds barred riffing, just pure aggression and raw energy. No breakthroughs in songwriting processes here. This is plain old Floridian Death Metal done in style. As we move beyond into the demo, you realise this is just an absolute raw effort. Yes, the production is not up to the mark, but hey this is a 90s Death Metal demo, what do you expect here? I didn’t come here for crystal clear 2021 Progressive Death Metal production, I know what is here and I’m ready for it. I hope you are too, because the band sounds killer, the vocals rise above the mix almost always and it does get annoying now and then. The brilliance of the guitars drowns it, but nevertheless in my opinion the vocals and the zero budget production are the only issues with this demo. The strength in songwriting remains intact. Moving onto the next part of the CD, the next 3 tracks are demo recordings and well, just add in to the completion of the recording output of the band. No particular feedback there. The next 8 tracks are the 2 versions of their first demo, version 1 released in January 1988 and the second version released in April 1988. I prefer the second version, it sounds slightly better in comparison, otherwise these again showcase the basic building blocks of the band where they showcase the original vision. Remember that tape you had on which you accidentally re-recorded several times? Yeah, that’s pretty much the overall quality of the sound and like stated before, the quality might not impress but the songwriting surely does. Moving to the last part of the 2nd disc, we have the only demo by BRUTALITY’s earlier avatar ABOMINATION. This is a pretty nice touch by Vic Records. We’re greeted with an acoustic intro, which gives way to the true spirit of Metal soon enough. ABOMINATION’s self-titled demo is razor sharp. The vocals are questionable, but musically this is pretty tight. On the whole, take a bow Vic Records. This is a stellar undertaking and the delivery is magnificent. Just buy this, period! For more information, please visit www.facebook.com/brutalitytheband, www.facebook.com/vic-records-321130546025