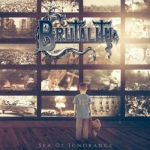 Talk about a blast from the past. I haven’t kept up with BRUTALITY much since their "When The Sky Turns Black" album that came out back in 1994 (I checked out only a couple of songs from their "In Mourning" album). Well it has been 3 – 4 years since they released any new material, 20 years since they had a full length album, and the band has been through numerous line-up changes (R.I.P. Bryan Hipp). With all that being said my jaw dropped when I found out that band was still around and not only that, but we get not only new material but a full album!!! It seems that several of the classic bands are getting a second wind and are either reuniting or are issuing out new material. So after 20 years you would expect a band to lose its ‘edge’ (talking to you OBITUARY) or step all over their legacy by changing their sound / style. Luckily that is not what you get here. I’ll be the first to point out that the band still can crank out some quality jams. The title track ‘Sea Of Ignorance’ is a reminder that these guys picked up right where they left off. ’48 To 52′ is a sonic relentless beat down that starts off with a calm melodic jam and then quickly picks up tempo, only to later slow down things with a great pair of guitar solos. Honestly, I’d have to say that BRUTALITY always had some of the best guitar solos on their albums and on this album it shows they did not forget to bring that crucial piece into the mix. The BATHORY cover ‘Shores In Flames’ is a nice welcome on the record. The drums and guitars are well produced throughout the album without one being more over the top than the other. Vocally, well it’s Death Metal so you know what you are getting from the get-go. You would expect some major rust on a band’s first album 20 years after their last full length but they really don’t have much rust and while I do think the band has grown they still haven’t lost the melodic side that caught my attention back in the 90s. Is this album "When The Sky…" part 2? No, this takes the basic elements and just goes from there while also still slowing things down a bit. I feel the band might have lost a step or two, but not enough to write them off as over the hill and yet still have an enjoyable album here. For more information: www.brutalitytheband.com, www.facebook.com/brutalitytheband, www.facebook.com/ceremonialrecords