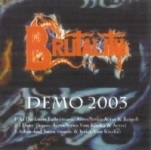 Man, this is really a hard one. I definitely tried to like this new sign of life of Florida based Death Metal veterans BRUTALITY and so I listened to it again, again and again. But it doesn’t help. In my humble opinion it surely would have been better to let BRUTALITY rest in piece. I guess you wanna know what’s wrong… Okay, I’ll tell you… The music totally sucks!!! It’s that simple. There are no ideas, no exciting moments, no brutality and nothing interesting at all. I’m really wondering what’s their mission these days. Hey boys you delivered three great albums of remarkable Florida style Death Metal. So why didn’t you create anything in that well known style instead of wasting our time with totally boring unnecessary crap. Okay, I guess we still can say this is Death Metal but it has not much to do with their three albums. Long-time members Jeff Acres (bass), Jim Coker (drums) and Scott Reigel (vocals) found two new guitarists. And this might be the main problem cause the guitar work on this demo is nothing but unspectacular and boring. Not one of the riffs or harmonies here kicks ass nor let you want to bang your head. The three songs are mainly mid paced (only ‘I Deny’ has some up tempo parts) and without any positive moments. The vocals are also crappy like hell. The voice reminds me of a poor version of Kam Lee (on "From Beyond") with a Hardcore touch. No power, no aggression… no talent. That’s sad cause Scott Reigel did a good job on the albums. It seems that BRUTALITY forgot how to play Death Metal and what this music is all about. As aforementioned I really tried to like this “Demo 2003” but it doesn’t work. I’m sorry but this demo proves my theory that really nobody needs those re-unions.