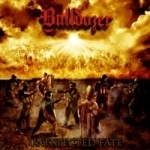 It seems, judging by the number of unexpected comebacks of 80s bands, like that well (which appeared seemingly bottomless just some years ago) is going to be drained really soon, so what would we have next? Digging deeper and summoning those from the other side? What a band it could have been… Blame these gloomy thoughts of mine on Italian vinyl maniacs from Night Of The Vinyl Dead – partly for their label’s name, partly for it were exactly them who gave the vinyl treatment to the new album of one of such unexpected reunions. Those nice senors never failed to impress with their releases and when it came to heroes of their own land, fellow Italian band BULLDOZER, they tried to jump over their heads and succeeded in it. Not many vinyl editions get their dedicated different mastering and 20 pages LP size booklets. I just wonder if the gentleman in the long robe on the cover of this album is the same one that has appeared on “The Day Of Wrath” front cover? One thing is evident – the ecclesiastics haven’t become AC’s best friends yet. BULLDOZER continues its crusade against everything and everyone who wants to mess with their way of thinking and oppress their freedom. Be it religion, politics or internet “social networks”, any form of herd mentality is simply beyond this band. It seems like AC has so much to say on the subject, that at times he wouldn’t be able to fit all his lyrics into the music, yet somehow he manages it just perfectly every time. His abrasive easy distinguishable voice is as strong as ever, and his all time companion Andy Panigada isn’t any worse after 20 years either, his upfront solos are pretty remarkable not even for some outstanding musical genius, but more for their untamed sound and feelings they are filled with. It looks like Alberto and Andy have been accumulating their hellish energy for almost two decades and now finally decided to unleash it unto unwarned fans. Great to see it coming in the right direction, unlike their strange “Dance Got Sick” adventure from the early 90s. Right from the start they make it crystal clear that their bulldozer still has all of its onetime power and might, and those who already wrote it off to scrap-Metal have mistaken it for dead way too early. You know, it surely isn’t very smart idea to stand in the way of an upcoming bulldozer, as such encounter may result in some tiny health problems. And the same applies to this BULLDOZER as well. It never humbly asked if there was any place in the scene left for it, but simply have been crushing it’s way through everything, not caring of what could end up under it’s tracks. “Unexpected Fate” doesn’t offer any power free and lifeless modern “old school Thrash”. No, it’s a real thing – great powerful Metal rooted in VENOM legacy. Many call it Thrash, but I wouldn’t add my voice to their choir. Even though these days BULLDOZER aren’t on strict VENOM diet as they used to be in their early days and have rather personal sound instead, still the ghost of the Newcastle trio materializes here and there on “Unexpected Fate”. It’s sound may reveal the modern day origins, yet its spirit goes far back in time. Of course, this album isn’t going to be a megaseller (and which of BULLDOZER’s albums was?) – it’s too honest for that kind of stardom. This music has soul and these lyrics have sense, but these qualities never were the best company for healthy sales figures. That’s glory and burden of cult status. In case you need to give a quick definition and an appropriate example of “cult band”, you surely won’t go wrong with BULLDOZER. They demonstrate honest non-conformist attitude and the fans repay them with their respect. That’s underground as it was meant to be, isn’t it? www.nightofthevinyldead.com