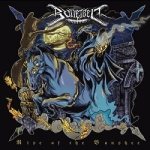 I can imagine that (still) not everybody is familiar with this horde from the other end of the world. I put "still" in parentheses ’cause this fact should actually change after you have listened to this absolute killer release. BULLETBELT are hailing from Wellington, New Zealand and just unleashed their second full length effort upon this filthy and rotten planet a while ago. The five piece has released a couple of very limited EPs and a live album since their unholy creation in 2009 and their black thrashing debut "Down From The Cold Grave" (released in 2012 on CD and vinyl) marked the highlight in their career so far. But you won’t be surprised when I tell you that "Rise Of The Banshee" tops the aforementioned album with ease. In my opinion this is the best squad coming from New Zealand lately and since the mighty, but sadly defunct, DEMONIAC saw their dark light of day somewhen in the early 90s. And guess what? This outfit has the first DEMONIAC drummer Steve Francis within its ranks who recorded the 1993 rehearsal demo with them. BULLETBELT’s line-up consists of very competent and skilled musicians, gifted with talent, who are by far no newcomers but Metal veterans who exactly know what they do and what they want – and this eight tracker is the perfect proof for that. Accomplished musicians are not always a guarantee for a great album as the vibe, attitude and atmosphere are important things as well. But in our case here you can relax and sit back ’cause these key factors are all here and that’s why it is a real pleasure to have a listen to this aural massacre. The guitars totally shred and deliver razor sharp guitar riffs. The riffing is heavily influenced by the first wave of Black Metal adding a lethal dose of Thrash and a few tradtional Heavy Metal elements as well. The atmosphere is menacing and ice cold but the superb axemen Ross and Ryan always come up with great hooks and superb leads which are catchy enough that you won’t get ’em out of your head anymore. This creates enough variety throughout the entire album and gives the quintet a unique touch so their Thrash ladden Black Metal doesn’t end in a blind alley. Like expected the pounding and relentless drum work is very skilled and you can hear that Francis is around for more than two decades behind the drum kit. Another distinctive trademark are the wicked vocals of Jolene Tempest. She is probably not from this world. A total acid trip of insane, evil type of vocals with deep snarls, growls and high pitched screams. Can’t describe – I think she comes close to Melissa of ADORIOR or at least heading into the same direction. By the way she is the successor of Fergus who was in charge of the vocal department on the first full length. I would say the production of "Rise Of The Banshee" is flawless for this genre. It’s powerful, very well but not over produced and unleashes a lot of anger. Very well done. If you are into bands like VENOM, BATHORY, SABBAT, DEMONIAC, NIFELHEIM and any kinds of classic old school Thrash Metal and first wave Black Metal then you should not hesitate to grab your copy of "Rise Of The Banshee" still today. You won’t be disappointed by tracks like ‘Deathgasm’, ‘Sniper’ (a cover from THE NOD which was a legendary Metal band from New Zealand), ‘Black Banshee’ or ‘Numbered Tomb’. This album hit me by surprise and it’s worth not being overlooked. Check out the band’s site at www.facebook.com/bulletbelt for further details.