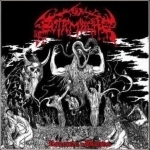 Emerging from one the most active and fertile scenes in Latin America, as it is Chile, we have with us the debut album from these devilish Metalheads called BUTAMACHO and their “Reunion De Brujos”, roughly translated to something like witches gathering. Such work saw the light back in 2011 under the blessing of Pacto Records from Chile too. Musically speaking, what BUTAMACHO brings is nothing but a rough crude mix of elements dealing with Black and Death Metal. The guitars themselves are pretty much in the Black Metal field, while the voices, with that lower tone growls add the heaviness and profane sound of early South American style that we can probably evoke listening to some Peruvian classics such as MORTEM for example. Being recorded under the classic parameters of the genre, this band sounds by no mean “modern”… completely contrary, this sound textures are clearly directed to the second half of the 90s decade, where no triggers or compressors were used. It looks that everything was recorded at the same time, and that makes the whole atmosphere of this work to posess such a “dirty” feeling… kind of pagan or heretic that I can only praise so much. The whole work features 6 songs, the third one ‘Niños De Queilen’ (Queilen Children) probably being the best, with an effective combination of a slow – mid tempo changes and what I call “diabolic” guitar solos and those obscure voices coming across all that mayhem and self-controlled chaos. Part of the atmosphere here comes from certain samples being used at the beginning of certain songs where you can hear the band playing some slow riffs and you hear torments, wind, rain etc. Pretty cool I must say. So bottom line, not to be considered the saviors of Metal music, but enough to grant you a good experience listening to these Chilean musicians delivering their malevolent form of crude and ancient Death Metal. More at www.pactorecords.blogspot.de