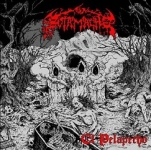 Chiloe is a big island in the southern corner of Chile. It also is a place fulfilled with old traditions, legends, mythological creatures, wizards, etc. A real magical and beautiful land. And it is also the land of a die hard Metal scene with one of the best crowds in this country and the home of  BUTAMACHO, a mythological creature of the mapuche tradition (Chilean aboriginal people), a short deformed man that protects the gate to the cave of the wizards. His head is twisted backwards, it can’t speak and only communicates by guttural sounds. A very accurate description for this brutal Death Metal act from Chiloe. In 2013 they presented us their debut MCD “Reunion De Brujos” (Gathering Of Wizards), also on this highly efficient Chilean imprint, but this time they deliver us their debut full length called “El Pelapecho” (a synonym word for Wizard in the Chiloean mythology), presenting mid paced Death Metal with influences from ASPHYX, BOLT THROWER, AUTOPSY, MASACRE (COL) and old INCANTATION plus some touches of late 80s /early 90s Chilean Death Metal (ATOMIC AGGRESSOR, SADISM, TORTURE). The lyrics are based on old tales / legends of their native Chiloe Island, sang in Spanish, with song titles like ‘El Pelapecho’, ‘Senedero De Cadaveres’, ‘Profundos Maleficios Inhumanos’, etc. And everything is blessed with a crystal clear production. I need to hail Marco and Apocalyptic Productions for his great roster, and his true dedication in supporting the Chilean scene, for keeping an eye on excellent bands, and delivering great stuff. Finally it’s unneccesary to say that all Death Metal maniacs should add BUTAMACHO to their playlist and to get all releases from Apocalyptic Productions. A must!! www.facebook.com/apocalyptic.zineprods